The movie about a mass of flesh called the BLOB - the top ruling fatso is heading towards reality.
It is a fact that the world population is becoming FATTER and Fatter.
The number of Obese and overweight people in the world almost quadrupled to nearly a billion between 1980 and up to 2009  and considering it is now 2014 it must be worse today.
People in developing countries are leading the chase to fatness.
It beggars belief that with all the info available regarding weight loss, so called intelligent people continue to gorge themselves, laziness - inactivity smoking and greediness the main problem, although it can be said that a fat obese parent could be the cause of triggering obesity.
Diet, alcohol smoking and activity mentioned before are controlling my  household,. my weight remains steady although I am a little overweight our two main meals of equal proportion for each of us contains a high content of vegetables but my wife is losing weight despite the extra noggin or two; this can be happening due to the daily walks to the local retailers. Our elderly son has a serious problem with weight. the main cause as I see it is Smoking and a sedentary glued to computer lifestyle, Although I may be wrong; my own opinion is that obesity is created by inactivity or dare I say it , 'Bone Idleness. and too much pork onyerfork'

Maybe I should hide until the furore in our tribe settles down.

Cor blimey Maurice try anglaise, next time. anyhow if speed is the essence in your case I would suggest a lettuce cucumber and tomato diet for a month, drink lots of water and two Enema's each day,

Amy: He seems to be of tadpole origin, or some person imitating one, bitova mystery-could be a blogger with a de gaulian phrase book, anyhow why the interest?

Folks: Amy is an ex staffer of a redundant or ex Lab MP. she is now employed by an ex or better put a defrocked pedo priest who runs a scam xmas hamper thingy.
Her tel calls have been blocked.

What is this thing youve got about catholic priests

Anon: unmasking priests of any denomination who are involved with bestiality is a service to the public.Other multi denomination priests who are either married or neutered are rarely involved in sordid acts against unprotected juveniles.


DB If you use this trick to advertise your business I shall have to charge you a minimum of AUD$20-00 per insertion.
BTW How is F M .... still riding her high Nag. poor horse

DB is currently enamoured to M who has high Christian values except when it comes to Marriage.
M was the catalyst for the OLD saying " The Show is not over until the fat lady sings.

Ah well, it seems there will be two less mourners at my funeral.
Have a nice day.

This is when only a Horse with eight legs can carry the load
Or maybe a shire cart horse.

I shall be busy awhile attending to a problem with my feet arms and legs - the problem started last week and the reason for not going to the beach or elsewhere. it is an old allergy which i thought had been cured since the nineties, tiny blisters are encroaching onto my being created as I see it as a latex-rubber intolerance.
Probs again, our doctor and staff are closed until 13 of Jan , but have an appointment at another Doctor further afield at 3-15 pm
I would rather be fat than have this prob again.

Vest. Someone is sticking pins into your effigy, Mike.

LDL:Hardly caused by pin sticking feminine pseudo kin activity, this was a gower before the stupid weekend,this was when a statement of fact was heard by one person and was relayed to another person,which was not the original statement and blown out of proportion.
The result will be two persons less to provide for in my Will. unless a sincere apology is received within the next week. FINI.

This will bring sadisdic joy to some to know I am now 90% covered in small itchy pimples caused by an alergy from latex which has been absent for 22 years.

Costing an arm and a leg as it was not my reg docter, I was prescribed medication which so far has had little effect but I am persevering.
It would seem that the Central coast is soldiering on with about 80% of its doctors away in places distant - spending the exorbitant fees extracted from us; the less rich. I have already sent my Doc a card stating I hoped he enjoyed his vacation' but I didn't" Surely A locum from India would grasp at the chance to work in OZ.
Will let you know how things progress, it can only get better.

The New Australian $10 Notes Have COVID-19 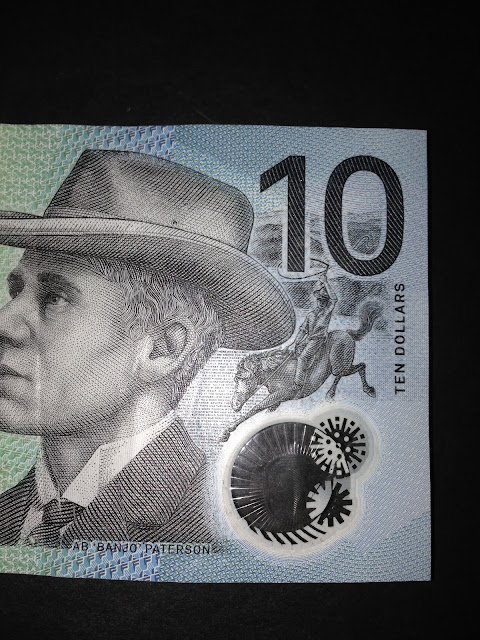